Note: I won’t offer any download links here. However, I will publish the file names and SHA-1 hashes of the required files. Maybe you can find those files somewhere in the World Wide Web.

I used Parallels Desktop to virtually execute WfW 3.11. If you use the setup wizard of Parallels Desktop and choose Windows 3.11 as the installation template, it will automatically add and connect a legacy NIC to your virtual machine. The legacy NIC of Parallels emulates a RealTek 8029 network card. Therefore, you will first need to install a driver for this NIC (or the NIC of your VM solution or actual 386-compatible PC, respectively). In case of RTL8029AS, the required driver files are:

As Parallels does not offer any integration tools for this version of Windows, I had to create an ISO image containing those files and connect this to the virtual machine. Fortunately, WfW 3.11 already supported CD drives, so you can directly install the drivers during Windows Setup: 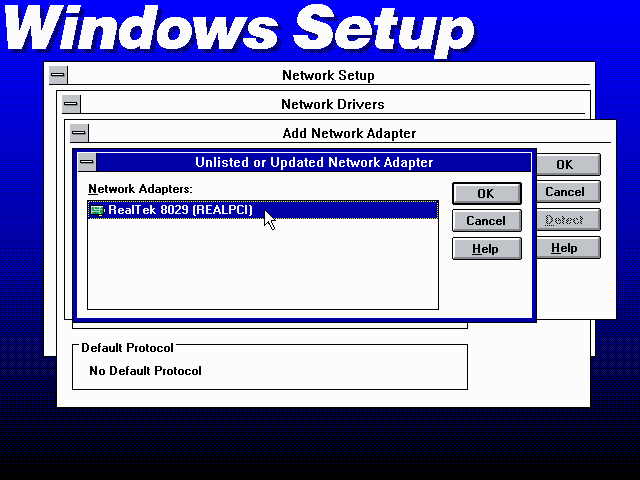 Windows Setup will automatically install two protocols: IPX/SPX Compatible Transport with NetBIOS and Microsoft NetBEUI, with the latter being the default protocol. We’ll change this later. For now, let’s finish the installation and then boot into Windows.

Now, we’ll install the TCP/IP stack. This was distributed as a separate download:

This executable file will extract the files of the TCP/IP stack to its working directory. Hence, you should copy tcp32b.exe to an own subdirectory such as C:\TCPIP and run the executable there. Now, switch to the Network Setup that can be found in Program Manager > Network > Network Setup. Click Drivers… > Add Protocol, then select Unlisted or Updated Protocol and specify the location of the extracted files. 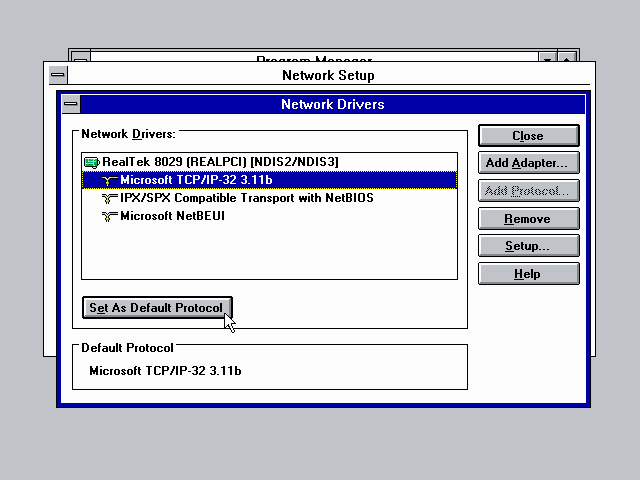 Next, make TCP/IP the standard protocol by selecting Microsoft TCP/IP-32 3.11b in the protocol list and clicking Set As Default Protocol. Click Cancel, followed by OK in the Network Setup dialog. Next, the Microsoft TCP/IP Configuration dialog will appear. As the VM will be connected to the shared network by default, enabling DHCP is a good choice here. Then, you will have to restart your PC or VM. This is also where your network adapter should get assigned an IP address, subnet and default gateway via DHCP. You can check this by using COMMAND.COM and running the ipconfig command: 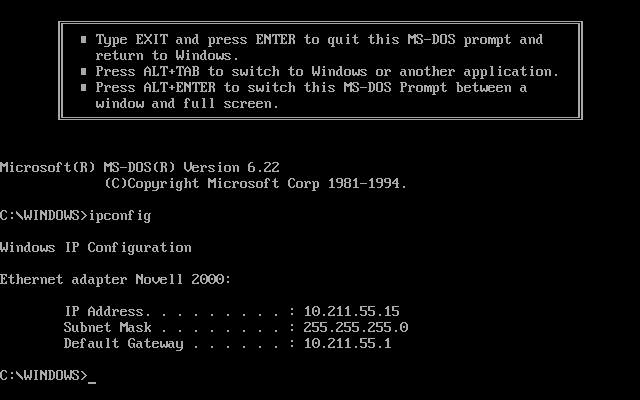 Now we are ready for the Internet! The TCP/IP program group in the Program Manager contains an FTP and a Telnet client, so you can enjoy the famous ASCII version of Star Wars (telnet towel.blinkenlights.nl): 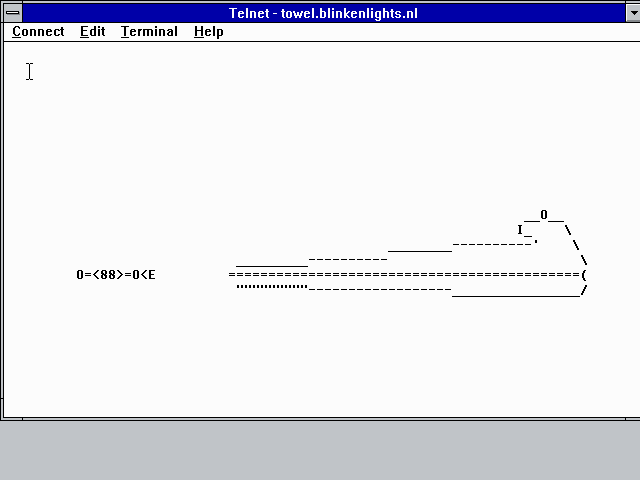 Alright, but what we obviously want to do is browse the web, of course. The Microsoft Internet Tools are available as a separate download, including Outlook Express and Internet Explorer. Internet Explorer 5.01 is the latest version of Microsoft’s browser compatible with Windows 3.11. Here are the installation files:

However, the setup won’t start if you have 64 MB of RAM (or more) installed and quit with the very cryptic error message

To force installation in this case, launch setup with the /f:16 flag (using the File > Run command of File/Program Manager or the MS-DOS Prompt): SETUP /f:16. After a reboot, you have to specify your time zone. Now, Internet Explorer and Outlook Express are ready to use: 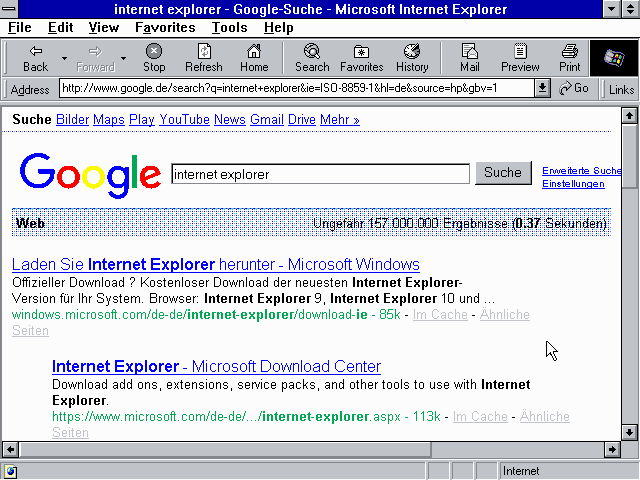 For increased security (up to SSL 3.0 with 128-bit encryption), you can additionally install the following extension:

I think the most interesting part of this is that even after 35 years of IPv4, 34 years of SMTP, 25 years of WWW, 23 years of Windows 3.11 and 17 years of Internet Explorer 5.01, everything’s still more or less working. And that’s an eternity in computer history! Granted, Outlook Express and Internet Explorer won’t be able to connect to encrypted mail/web servers with TLS or modern cipher suites. Internet Explorer will fail rendering the majority of websites as HTML, CSS and JavaScript have evolved and grown in complexity. But after all: The base technologies are working and you can successfully connect to the Internet. In the future, this might change due to new protocol generations such as HTTP/2, IPv6 and better security mechanisms. But on the other side, the future doesn’t need WfW 3.11.